As a Baby Boomer woman who loves to read, there are two radio shows I don’t like to miss as they both feature authors on a regular basis. The first one is What She Said which can be found on SIRIUSXM Satellite Radio, Channel 167 Canada Talks. It airs at ten o’clock in the morning on weekdays and is hosted by Christine Bentley, Kate Wheeler and Sharon Cady. In fact, yours truly was once one of the authors interviewed on their show. What She SaidÂ appeals to a wide audience but the topics they cover are particularly relevant to women and very often Baby Boomer women.

The other show I really enjoy is The Judith Regan Show which airs once a week on SIRIUSXM Satellite Channel 106 at eleven o’clock on Saturday mornings for two hours. Judith Regan is a gregarious Boomer Broad from New York whose career spans publishing, broadcasting and journalism. She’s informed, funny and provocative. Her guests are most often authors of books covering wide-ranging topics including self-help, fiction, non-fiction, business and wellness. Now that she’s in her sixties, Regan jokingly describes her vagina as “closed for business”.

When satellite radio was first introduced I resisted the idea of paying for a subscription service when I’d never known anything but free radio programming all my life. It’s proven its worth many times over. Although it claims to be free of advertising, that’s not entirely true and every time I hear an ad for some product or service slipped I get extremely annoyed. One of these days I’ll have to e-mail them about it.

As well as What She Said and The Judith Regan Show I’m a fan of many other shows such as Ward & Al on SIRIUSXM Canada Talks, as well as CBC FM radio on Sunday afternoons and, of course, the channels dedicated to fifties and sixties music when I feel like singin’. Satellite radio also affords me the benefit of listening to programs on long trips without switching channels. I can catch real-time CBC news in Florida (which cannot be said for television) and continuous programming without changing channels during my six-hour drive to visit my parents.

Is it a characteristic of getting old that I no longer listen to music as much as I used to? Public radio and talk shows are my programs of choice these days and I learn so much about what’s going on in the world, without the grimness and negativity so prevalent in television news. We’re continually bombarded with so many forms of media today that I quite enjoy the simplicity of the good old radio. And when I’m not listening to the radio, I often spend vast stretches of time in complete silence just to clear my head and savour the peace and quiet. As I said in an earlier blog (Feeling uninspired, take a nap), we often do our best thinking when we’re idle. We need time to recharge our batteries and I find this is best done in silence. Paul Simon said it so eloquently when he sang with Art Garfunkel:

“Hello darkness, my old friend
I’ve come to talk with you again
Because a vision softly creeping
Left its seeds while I was sleeping
And the vision that was planted in my brain
Still remains
Within the sound of silence”

But for those times when silence isn’t on your agenda and you need some good old fashioned girl talk you can relate to, tune in to What She Said or The Judith Regan Show on SIRIUSXM Satellite Radio. (This is definitely not a paid advertisement; just good old fashioned sharing a good thing from one girlfriend to another.) 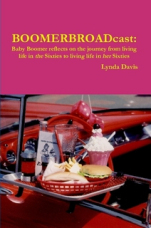 I completely agree with you! Although I don’t listen to Sirius (ever since my free subscription in my new car went away), I almost exclusively listen to public radio or nothing at all. I have always felt a little embarrassed that I don’t listen to music very much, but I get so much enjoyment out of learning something (on NPR) or existing in silence. I’m happy to know that I’m not the only one.

I guess that just means we’re becoming more sophisticated in our listening choices. Thanks for your feedback. Â Lynda Davis Follow my blog at: http://www.boomerbroadcast.net Social commentary on life from a Boomer Broad’s perspective e-mail: lyndadavis1@yahoo.ca For further insights into the Boomer perspective on business, fashion, mind and body, order my new book, BOOMERBROADcast. It makes a great hostess, birthday or Christmas gift. Click on this link: http://www.lulu.comÂ  orÂ http://www.amazon.com