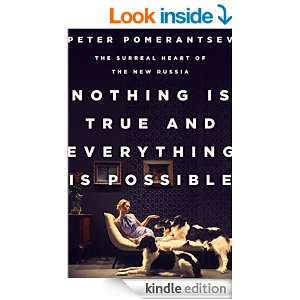 My interest in Russia and its people probably began when I first viewed Dr. Zhivago in English with Dutch subtitles in an Amsterdam movie theatre in October 1967. The music was haunting. The history is stark, brutal and complex. So, when I heard Peter Pomerantsev, author of Nothing is True and Everything is Possible: The Surreal Heart of the New Russia being interviewed by Judith Regan on Sirius Radio I immediately downloaded the book onto my Kindle. Pomerantsev was born in Russia and moved to England as a child with his family. Working in broadcasting in the U.K. gave him the kind of experience Russian television was looking for when the iron curtain fell. Western cultural ideologies and practices found an entirely new audience in the millions of Russians who wanted to embrace this insurgence of new ideas.

Pomerantsev brought the advantages of being born in Russia and speaking Russian as well as being educated in England and working in British broadcasting. Taking this experience to Moscow where he lived for nine years, he worked originally forÂ  light-hearted local television, then later for Ostankino, the Kremlin’s official mouthpiece. What he found in his former native land was at times hilarious, sad, evocative and sobering. He describes the work of Golddigger Academies who offer classroom-style training for beautiful young Russian women on how to attract rich men to sponsor their lifestyles of nice apartments, glamorous clothes and financial security.

Russia’s attempts to embrace and emulate everything western has resulted in varying degrees of success and failure. As a broadcaster/producer, Pomerantsev describes the colossal failure of his attempt at a Russian version of Dragon’s Den or The Apprentice. After decades of Communism, corruption and graft, viewers and participants had no conception of western-style business philosophy based on hard work, market research, customer service and supply and demand. Accustomed to simply buying what they were told to buy and paying whomever and whatever they were told to pay without any consideration for market conditions, the Russian viewers simply could not comprehend the entrepreneurial concept. In fact, their entire value system is very different from our own.

Teaching Russians the capitalist principles of business resulted in growth industries in business training and education. Even the scary and questionable Western organizations like LifeSpring that were popular in the 80s gained a strong foothold as people experimented with new philosophies. The Rose of The World is based on LifeSpring and a modification of an earlier Stalinist personal growth and development program with incremental levels of training and financial outlay required to evolve into the perfect person (sound familiar?). Members are humiliated and intimidated into increasingly more controlling “personal training” and is considered by many to beÂ  a dangerous cult. Russia is also rife with racism and prejudice against segments of their own population.

In their enthusiasm to embrace everything western, Russia has undergone a circle of trial and error leading up to Putin’s current backpedaling toward old-style Communism. And like the ancient Egyptians, Russians systematically destroy physical and psychological evidence of previous rulers and governments to proclaim the virtues of the latest flavour-of-the-month running the country.

Throughout these transitions, however, the one constant is corruption. No one trusts the system and everyone is always looking over their shoulder to protect themselves. Former Russian crime bosses and oligarchs have been replaced by Putin’s appointees who are once again the official manipulators and rapists of the system. Organized crime bosses have expanded outside Russia to the U.K., United States and other countries where their activities are legitimized through laundered businesses and enterprises. Pomerantsev describes hyper-projects such as the Russian Winter Olympics in Sochi. At $50 billion “the project cost $30 billion more than the previous summer games in London and five times more expensive than any Winter Olympics ever”. The extra money is siphoned off to benefit and enrich those individuals and organizations loyal to the Kremlin bosses.

My quest to become better informed about Russia and to better understand its people was somewhat satisfied but at the same time, having finished the book I know I would never like to live there although I definitely would like to visit. The country and its people are fascinating, fallible and functioning under a set of principles completely different from how we live life in the west. Many of their more unsavory characters are infiltrating western business and cultural practices and our law enforcement agencies are constantly monitoring their movements and activities. Nothing is True and Everything is Possible is a fascinating read and while it did satisfy some of my curiosity it also heightened my quest to learn even more. It was an amazing book and I highly recommend it.

For further insights into the Boomer perspective on business, fashion, mind and body, order my new book, BOOMERBROADcast. It makes a great hostess, birthday or anytime gift. Click on this link: http://www.lulu.comÂ  orÂ http://www.amazon.com