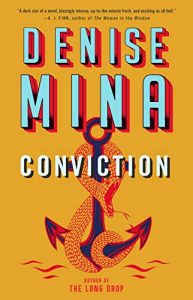 Stepping outside our comfort zone can sometimes be a nice distraction or even a pleasant surprise—including when it comes to what type of books we read. I’m a confirmed lover of historical fiction but somehow I’ve stumbled upon some crime thrillers recently that proved to be great fun. Conviction by Denise Mina is such a book and not the sort of book that normally turns up on my To Read list.

Conviction is the story of Anna McDonald aka Sophie, a Glasgow housewife, married to a straight-laced lawyer named (what else?) Hamish. Their marriage is in trouble, largely due to Anna’s mood swings and refusal to leave Glasgow even for a vacation. Why is she so difficult and her moods so unpredictable? As it happens, ten years earlier when Anna was known as Sophie, she was subjected to a brutal gang rape by several London professional football players. This was in the days before #metoo and because she was drunk and in their hotel room voluntarily, the victim was revictimized by the press, the public, and the judicial system, and the footballers were acquitted.

The owner of the football team was determined to protect the reputation of the team and its players to the extent that when a witness to the brutal assault later came forward in Sophie’s defense, the witness was permanently silenced, i.e. murdered, to prevent a retrial and vindication of Sophie. So, Sophie goes into hiding and changes her identity, assuming a new name, Anna McDonald who marries a successful Glasgow lawyer who is unaware of her past, and later has two children.

On the very day her husband chooses to leave her for her best friend Estelle, Anna/Sophie stumbles on a podcast of an unsolved crime that involves a man she met many years earlier. While working as a chambermaid at the posh Scottish resort called Skibo Castle (where Madonna once had one of her weddings), Anna meets a handsome man called Leon Parker when they’re both sneaking a smoke behind the hotel. In the podcast, Anna is shocked to learn Leon died, along with his two children in a mysterious sinking of his yacht, Dana, off the coast of France. At the time of his death, Leon was married to Gretchen Teigler, the owner of the same football team whose players brutally raped Sophie, now Anna, ten years earlier.

The combination of PTSD and the news of her husband leaving throws Anna into a state of confusion and despair. She becomes unhinged and decides to distract herself from the failings of her current life by finding out what really happened to Leon Parker and the sinking of his yacht. As she’s ready to run away, she’s confronted at her front door by her best friend’s now-deserted husband Fin, a highly-recognizable pop star with his own set of problems apart from his straying wife. So Anna, reluctantly with Fin in tow, sets off on their road trip to solve the Leon Parker murder mystery and escape their existential problems.

So, now I’ve set up the foundation for the story. The rest of the book is tales of the pair on the run. Their lives are in constant danger from unknown sources. They travel to northern Scotland, France, and Italy which provides a lovely backdrop for their adventures. More creepy characters are introduced. Will they get caught? Will they solve the mystery of how Leon Parker and his children really died in that suspicious sinking? Will their respective spouses see the error of their ways and seek recourse? All these questions are part of the mystery and you’ll have to read the book to find out the answers. It’s a really fun romp and like any crime thriller, truth and reality are not part of the equation. I’d rate it 7 out 10 and reading Conviction reminded me that it can be fun to step outside my usual historical fiction comfort zone once in a while. Conviction is also currently the recommended read on Reese Witherspoon’s BookClub.

To order CONVICTION by Denise Mina from Amazon, click here.

Disclosure: If you order from this link you will receive Amazon’s best price and I may receive a teeny, tiny commission. Thank you.